World Divides on Whether Ski Areas Should Open or Not

The world’s ski nations are dividing on whether they should allow their ski resorts to open for the 20-21 season in December or not.

So far hundreds of ski areas have opened already in Canada, China, Finland, Iraq, Japan, Kazakhstan, Morocco, Norway, Pakistan, Romania, Scotland, Slovakia, Sweden, Switzerland and the USA with other countries including Scotland saying they expect their ski areas to open in the next few weeks.

Against this some of the world’s leading ski nations including France, Germany and Italy have said ski areas shouldn’t open until mid-January to avoid the danger of the pandemic spreading.  A number of other countries are yet to make a final decision.

The leaders of France, Germany and Italy are asking other EU ski nations to join them, whilst their governments themselves are receiving intense pressure from ski regions to reverse, or at last tone down their decision to allow limited opening.

Austria announced on Wednesday a compromise that will see its ski areas opening from Christmas Eve but only to locals, with restaurants and hotels closed. “Ski holiday tourism” may resume on or after January 7th, 2021, it’s hoped.

Andorra announced on Thursday December 4th that their ski resorts wouldn’t open until January but currently it seems ski areas in Spain can open. Many aren’t opening yet though for logistical  reasons or simple shortage of snow, but one of the biggest Baqueira Beret, plans to open December 10th and will be one of the few ski areas in the Pyrenees open.

ski areas in Romania, Scotland (Glencoe – initially for sledging only!) and Slovakia announced they were opening this weekend. 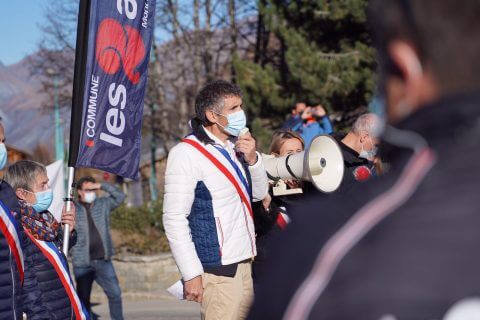 (Over 300 ski area workers attended a protest meeting in Les 2 Alpes yesterday, one of many in ski areas in France and Italy at present)

Governments and health professionals argue that some ski areas were believed responsible for the fast spread of COVID 19 last February and March but resorts argue this was only the case at a small number of ski areas famous for their apres ski.  They argue that apres ski won’t happen this season and that all the other virus-safety measures they’ve put in place mean they’re safe to open.

They also argue that the huge financial losses that will be incurred and the loss of the collective physical health and mental happiness people get from being in the mountains outweighs the perceived benefits in terms of stopping the pandemic spread by closing resorts.

The World Health Organization’s (WHO) emergencies chief Dr. Michael Ryan also weighed in to the debate on Monday saying the risk of catching COVID-19 while skiing is likely to be minimal, but that the dangers of transmission came at airports, in transfer buses, on lifts and where people meet up off the slopes. The Organisation did not pass an opinion on whether ski resorts should open or not, only saying everyone should look at the issues very, very carefully.