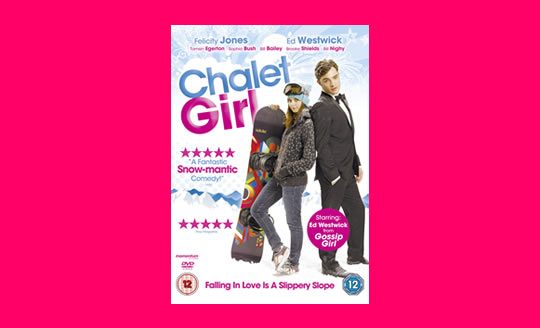 Hit UK blockbuster Chalet Girl has been released on DVD and Blu-Ray, and to celebrate the release of the film InTheSnow has teamed up with the film distributors to give away some fantastic prizes. A typical romantic comedy, the film is packed with action, as Kim Matthews (Felicity Jones), who plays the Chalet Girl, and Jonny (Ed Westwick), the son of the chalet’s owner, fall in love. It’s a tale of trials and tribulations as Kim finds her feet working in the luxury chalet.

InTheSnow has 20 copies of the DVD to give away, as well as one Grand Prize. We also have the salopettes worn by Nicholas Braun who plays Nigel, the brother of Jonny in the film to give away to one lucky winner as the Grand Prize.

All you have to do to be in with a chance of winning is answer the following question;

In which US television series does actor Ed Westwick play Chuck Bass?

To be in with a chance of winning- email your name, address, and your answer to [email protected] by Thursday 1 December 2011*.

WIN a Holiday to Karma Bavaria

Driving To The Alps

Skiing By The Lake