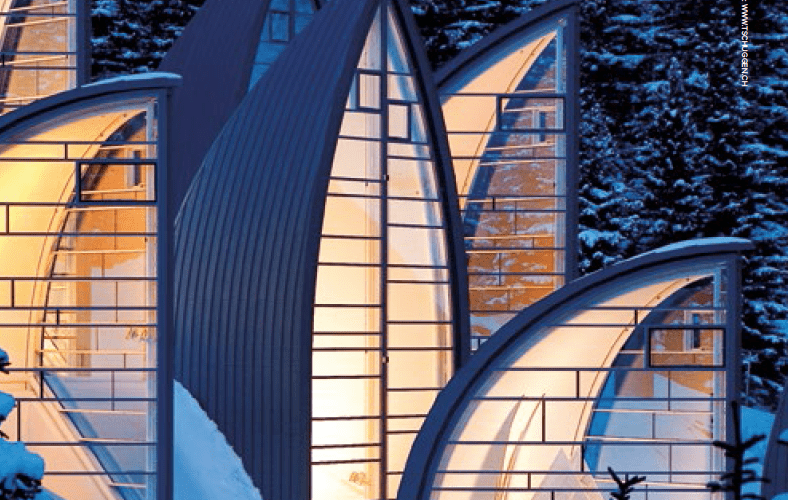 Skiing In The Tracks Of The Rich & Famous

It’s not often that we get to ski in the same tracks as the rich and famous. But sometimes it is possible to stay in the same hotels, even the same hotel rooms, as kings and queens, Shahs, sultans, presidents, prime ministers, popes, billionaires, and Hollywood A-listers, in fact, almost every type of “famous person” who has lived since the first winter sports holidays were organised in St Moritz in the 1860s.

It’s perhaps one of the nicer things about winter sports; because of the necessity to wear body-covering ski attire, you can be sat next to someone famous on the chairlift and not even know it (unless there’s an armed bodyguard between you and him/her, which might give the game away!).

And although there have been a few infamous attempts by the super-rich to take over slopes for their private use – most notoriously the multi-billionaire boss of Samsung, who once requested the private use of a public slope at Courchevel so that he could learn to ski away from the media spotlight, thankfully resulting in howls of protest that such a thing could be contemplated by the general skiing public – most famous folk are happy to spent time on the slopes with the rest of us.

So, remembering it’s not cool to actually go and hassle a ski holidaying celeb, here’s a quick guide to the places where you’re most likely to end up sharing a lift with a royal, or other VIP.

Royalty In The Snow

The British royal family are, of course, well-known for their love of snow sports, helping to encourage the creation of ski areas in Scotland in the 1960s, and then regular visitors to Klosters, Switzerland, although Prince Charles took Princess Diana to learn to ski in Lichtenstein to avoid the media expecting them at the Walserhof hotel (walserhof.ch). Later in their marriage they stayed at the historic Arlberg Hospiz Hotel, in St Christoph above St Anton, Austria (arlberghospiz.at).

The younger generation have been spotted in the French Alps, but Prince Harry is thought to favour the global favourite of the rich and famous, St Moritz in Switzerland, and his brother and sister-in-law are reported to be organising a 30th birthday party for him with a St-Moritz-themed room created in Kensington Palace.

Prince William and Kate themselves enjoyed a post-wedding summertime escape to the isolated Skoki Lodge (skoki.com) in the backcountry near Lake Louise in western Canada. You can stay where they did by taking an excursion if you’re staying at Lake Louise.

Many other royal families are keen skiers too. The Dutch royals are regulars in the Arlberg, Austria, although perhaps not so much now after Prince Friso tragically died after being buried in an avalanche while skiing there off-piste. The exclusive enclave of Zürs in the same region also attracts other royals, including members of Monaco’s royal family.

The Spanish royals have their own resort village at Baqueira-Beret in the Pyrenees, known as La Pleta de Ley (or “the King´s hamlet”). The new King Felipe VI and his sisters, Princesses Elena and Cristina, are reported to be keen skiers.

But St Moritz remains the destination of choice for many other royal families, as it has been for a century and a half, with most choosing to stay at one of its 5★ luxury hotels. The secluded Suvretta House (suvrettahouse.ch), with its Prada-clad private ski school, is a particular favourite, and excellent skier King Carl Gustav of Sweden is one of its regular visitors.

The Swiss resort of Davos is a pretty sure bet if you’re hoping to meet many of the world’s top politicians and super-rich on the slopes. Make sure you buy your lift pass during the World Economic Forum (weforum.org), which is next staged here from 21–24 January 2015.

Unfortunately, one of the world’s top skiing politicians is not the planet’s most popular at present – President Putin is reputed to ski alongside other visiting Muscovites at the local Shukolovo Ski Club (although that may be a bit hard to believe), he was, of course, the major driving force behind resort development at Sochi for the Olympics last winter.

President Obama isn’t believed to be a skier, although previous presidents have been, with the Ford family leaving a lasting legacy in the US resort of Vail Valley, Colorado. However, First Lady Michelle Obama has been to several ski resorts, and caused a controversy (among those who don’t like her) with her hotel bill a few winters back, when she stayed at The Sebastian in Vail (thesebastianvail.com).

Probably the richest pickings for celebrity spotting are  those with historical connections to Hollywood stars from the golden years of Hollywood, as many current stars still make their way out to these resorts today. Sun Valley in Idaho, for example, saw many great names including Frank Sinatra and Marilyn Monroe grace its facilities, and in St Moritz, once again, the list of famous names visiting is probably in the thousands. Charlie Chaplin was reputed to be the first man to drive a vehicle up to St Moritz in the winter, using a car sporting cat tracks on its rear wheels, whilst Alfred Hitchcock maintained a suite at the Palace Hotel for many years. Sophia Loren did the same, but she chose the Gstaad Palace, with David Niven preferring to stay in the neighbouring village of Chateau D’Oex.

Western Canada is another popular choice. Chateau Lake Louise’s past guest list includes Jim Carrey, Dan Ackroyd, and John Travolta, while the Banff Springs has hosted Robin Williams, Bob Hope, and Marilyn Monroe was a guest when filming The River of No Return in 1953. More recently, Leonardo DiCaprio stayed at the Delta Kananaskis at Nakiska Mountain Resort, during the filming of Inception, which took place at the moth-balled Fortress ski area just up the valley.

Back in the Alps, The Beatles filmed Help! in the Austrian resort of Obertauern, and stayed in the Hotel Edelweiss (luerzer.at/de-sporthotel-obertauern.htm). For the same reason, George Michael stayed at the 5★ Ferienart (ferienart.ch) in Saas-Fee, Switzerland, 30 years ago this winter, where he and Andrew Ridgeley filmed the video for Last Christmas.

celebrities m, examples includewho and who

However, not all Hollywood stars are good guests. Frank Sinatra immediately ordered 200 fresh raw eggs when he checked in at the luxurious Cristallo Palace in Cortina d’Ampezzo, Italy. An egg fight ensued, and by the end of the evening the wallpaper in the suite needed replacing. On the upside the redecorated suite is now named the Frank Sinatra.