French ski resort les 2 Alpes has cancelled it’s ‘Enjoy the Glacier’ festival due to be staged later this month, for the second year in a row.

The resort has blamed warm summer and autumn temperatures, which have left the glacier, which they say is the largest skiable glacier in the Alps, with inadequate snow cover for skiing and boarding (the picture top is a file photo).

The event, which has taken place under various names for several decades previously, was due to run over the first weekend of the 27 October – 4 November opening period. The resort will then shut down again until its full winter opening on December 1st.

(A promo video for the 2017 event, which was also cancelled)

The festival was due to host pro riders demonstrating their skills and offer resort guests the chance to test new gear from a variety of ski and board companies.  Les 2 Alpes says the resort will still open for the festival week but there’ll now be a focus on summer mountain sports instead under the name ‘Enjoy Les 2 Alpes’.

The other French ski resort that offers autumn glacier skiing, Tignes, is also currently closed for the same reason.  It was due to open on the last weekend of last month but announced a few days before that it had been advised by slope security staff not to do so until there was more snow.

There was a small snowfall in early October but it hasn’t been enough.

11 glacier ski areas are now open in Austria, Italy and Switzerland but several delayed opening or had closed periods due to lack of snow and about half are currently reporting snow depths of 30cm or less. 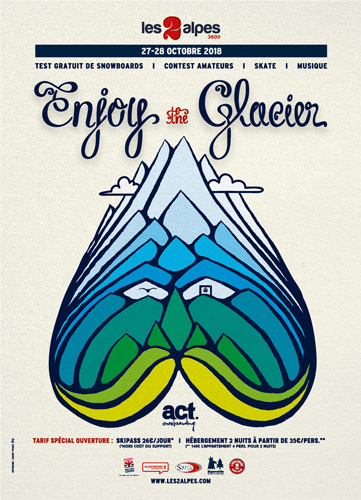