Former number one British alpine skier, Konrad Bartelski, is proving again in his latest exhibition that he is every bit as talented behind the camera as he is on two skis.

Konrad’s latest exhibition comprises mostly mind-blowing mountain landscapes. The black and white photos are given full dramatic effect by their exquisite print quality and large size, up to 72 x 48 inches.

The stand-out work for this reviewer is titled Narnia taken in Tsugaike Kogen, Japan and shows a skier navigating his way through a tree-lined slope. The detail of the snow-covered trees is astonishing and the composition is spot on.

His two photos on display from Chile are equally striking. Monument and Chimneys capture these uniquely striking mountains in all their craggy glory and compare favourably to the works of American landscape photographer and environmentalist Ansell Adams.

Konrad’s says the exhibition is about space and perspective. He doesn’t have a singular favourite photo but adds:

“The one I would have in my house is called Watercolours which captures the essence of Japanese art and what I feel and see when I go to Japan and I ski a lot in Japan.”

Also on display are three engaging animal pictures, showing Konrad’s versatility as a photographer. With his love of Japan there is inevitably a picture of snow monkeys – a wonderful work showing a mother and child looking wistfully. Closer to home is a shot of a seagull perfectly captured in mid flight in West Wittering, and a dark, moody profile pic of a horse in Epsom.

Limited edition prints are available from £690 and an A3 format, 68 page book of Konrad’s work is available to pre-order for £119.

The exhibition is held at Wimbledon Fine Art, 41 Church Road, Wimbledon Village, London SW19 5DG and open daily from 11am to 4pm until December 23.  Entry is free.

Konrad has donated one of his works to help raise money for wounded veterans. The picture of Mont Blanc, The Crown, is being auctioned online and you have until December 16 to make a bid. Click here for further details. 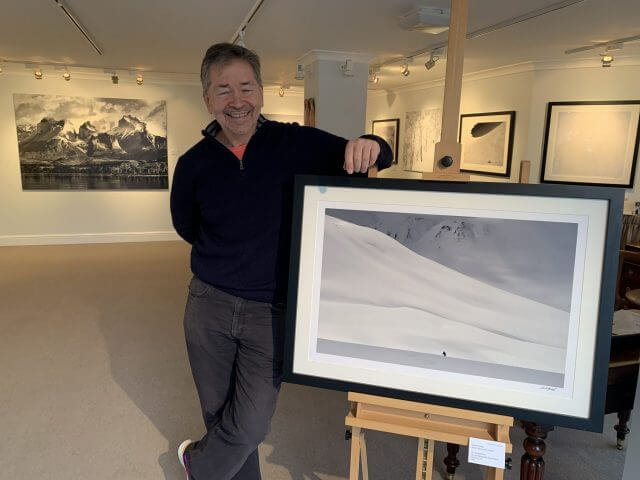