We have teamed up with Caprices Festival for this fantastic giveaway. You can win – 2 full weekend festival passes for weekend two of the festival (15/16/17 April), 1 room hotel stay for 3 nights (15/16/17 April) plus 2 ski passes.

After a two year break from the snow Caprices can finally announce the return to its original winter version, with headliners including Luciano b2b Ricardo Villalobos, Sven Väth, RPR Soundsystem, Jamie Jones, Tale of Us, Cassy, Dixon, Âme, Recondite, Dana Ruh & more and we have tickets and more to giveaway.

Switzerland’s iconic mountain festival returns to the snow for its 19th edition. After holding the event in summer the past two years due to the pandemic, the festival can finally return to its original winter date so that revelers can once again enjoy skiing the pristine slopes of Crans Montana, as well as getting stuck into the festival’s offerings.

Artists who have been announced for this year’s edition include Sven Väth who will be performing a special show as part of his Catharsis album launch tour (his first solo album in 20 years!) in addition to Dixon, Tale of Us and Âme who will make their debut and offer a new dimension to the infamous Modernity Stage, Luciano b2b Ricardo Villalobos, RPR Soundsystem, Jamie Jones, Cassy, Recondite, Dana Ruh, Guti, Archie Hamilton, Pan Pot, Digby, Janeret b2b Varhat, Alci to name just a few. 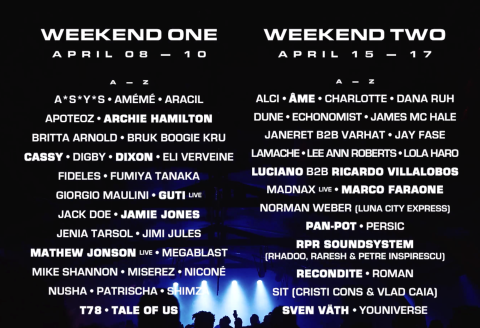