Christmas In The Snow

Christmas in the UK is normally a grey, wet and warm time, probably spent with relatives you don’t particularly want to see, following months of heightened sales pressure, and with the added joy of a polarised Christmas election this year, could there be a more magical time to escape to the safety and sanity of the snowy slopes?

What could be better than spending the final days before Christmas in a beautiful white wonderland, then waking Christmas morning able to spend the day on the slopes, hopefully with someone else making Christmas lunch and clearing up afterwards?

This year we detail some of the best countries to consider for your Christmas ski holiday, including the option to choose depending on your favourite food, and also list 12 ski resorts that manage to combine a snow-sure altitude with a festive (rather than moon-based) feel. 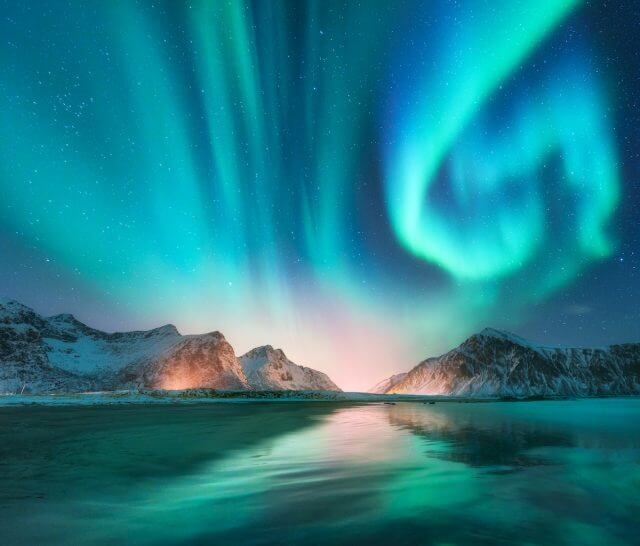 It may be dark and hopefully cold in Norway in December, but that’s all the more reason to mix some skiing with a cosy Christmas. The very word “Yule” comes from the Norwegian word “Jul” and of course it’s from here that the big Christmas tree on Trafalgar Square is delivered each year.

But where to ski in Norway? Well, it’s hard to go wrong as all of the country’s resorts should feel nice and Christmassy, but the 1994 Olympic destination of Lillehammer is a particularly good choice, with a host of Yuletide festivities laid on and a big Christmas market with more than 100 stands.

This being Norway there are a few quirky Christmas traditions to be aware of too. First, there was once a law in Norway that enough beer was brewed by each Norwegian to ensure they had enough in the house to be able to treat visiting neighbours at Christmas. That law is no more, alas, but the tradition of “Juleøl” or Christmas beer lives on.

Another tradition is a kind of Christmas “trick or treat” – it takes some explaining but in short don’t be too surprised if you see a Julebukk or “Christmas Goat” leading children in an evening of “Julebukking”.

Austrian ski resorts are usually a wonderful choice for your Christmas ski holiday.

The country has tightly controlled the development of ski villages, insisting traditional wooden-chalet-style buildings are built with no high rises and no concrete, so once these are buried in snow with Christmas lights twinkling on top, the feeling gets very jolly and festive indeed.

Christmas is timeless and traditional in Austria with many houses decorated with an advent wreath (the proper version of that hideous thing we used to make with coat hangers from Blue Peter), and many ski resorts have a “Christkindlmarkt” (Christmas market) selling Christmas decorations, food (like gingerbread) and Glühwein (sweet, warm mulled wine).

Every town will also have a large Christmas tree in the town square, and carol singing is popular, with Silent Night (“Stille Nacht”), which was written in Austria two centuries ago in 1818, still the favourite.

Having laid claim to being the home of Santa Claus, it’s hard to find anywhere much more Christmassy than Finland.

It’s almost 24-hour darkness up in Lapland over Christmas, a few days after the shortest day (and by short we’re talking just a few hours!), but with everywhere – villages and ski slopes alike – lit up with Christmas lights and floodlights respectively, and often light snow falling eternally, there’s often a kind of ethereal magic to the atmosphere.

Santa is, of course, available to visit, but be careful where you choose to meet him. He has several different houses and villages welcoming visitors, some very traditional where you can make gingerbread cookies and sing traditional carols with the big man, others rather more “Disneyfied”  experiences.

Even without Santa, Finland would be a great Christmas ski choice. The whole country gets into full festive mode at lunchtime on Christmas Eve when the “Christmas peace” is broadcast on national TV and radio – a wonderful idea.

Italy is home to lots of wonderful atmospheric resorts liker Courmayeur or Alagna, which make great choices for a Christmas holiday.

There are all the usual Christmas attractions in the country’s ski areas but a few extras less common elsewhere.

One is the Nativity crib scene which has been a big Christmas feature in the country since the  Christmas story was made popular here by St. Francis of Assisi nearly eight centuries ago in 1223, although the first crib scenes are believed to date back nearly 1,000 years to 1025.

One old Italian custom is that children go out carol singing and playing songs on shepherds’ pipes, wearing shepherds’ sandals and hats.

Italy also gave us its own Christmas cake, which fills the shelves of German discount supermarkets in the UK each autumn. “Panettone” is a dry fruity sponge cake, and when eaten fresh with a cup of hot chocolate on an Italian ski slope on Christmas Day, it tastes much better.

The US may be derided as the country responsible for our pre-Christmas shopping excesses and obsessive consumerism a million miles away from any Christmas cheer, but it (or at least Coca-Cola) can take credit for giving us Santa Claus in his modern guise, and it’s certainly a good choice if you want to supercharge your Christmas, and Christmas meal. The great Christmas movies It’s A Wonderful Life, Miracle on 34th Street, Elf, National Lampoon’s Christmas Vacation and, of course, A Chipmunk Christmas were all filmed in the US.

Actually, the Christmas holidays still play second fiddle to Thanksgiving in the US about a month earlier, but driving from the airport to your ski resort you’ll see some incredible home illuminations and decorations, and while many big US resorts are rather soulless affairs, there are plenty of smaller resorts, particularly in areas like New England, that have a lovely Christmas mood.

Of course, what you eat for your Christmas lunch is up to you, and what’s considered the “usual meal” in many countries is changing too. It’s also not difficult to find a vegetarian or even vegan Christmas meal option in most resorts (in fact, in Bulgaria, it is traditional to have a big vegetarian Christmas Eve meal, apparently). But here, for a bit of fun, is what you could look forward to depending on which ski destination nation you pick. Keep in mind that many of these meals are served on Christmas Eve, not Christmas Day:

Sadly perhaps, what must be one of the most successful advertising campaigns of all time by KFC back in the 1970s has seen fried chicken become Japan’s Christmas dish. You can eat sensational fresh, healthy cuisine the other 364 days of the year.

The big Christmas meal in France is traditionally eaten after Mass on Christmas Eve and is most commonly goose, although duck and turkey are also increasingly popular alternatives.

Although most Norwegians go for roast pork on Christmas Eve, a sheep’s head is considered a delicacy at some households for Christmas dinner.

Swedish resorts serve Christmas ham and the same meal is popular in Switzerland, although here you could also partake in a festive fondue.

Reported to be increasingly popular for Christmas lunch in Finland, replacing the long-time favourite, a leg of pork.

US Christmas dinners tend to involve turkey or ham in a rerun of Thanksgiving four weeks before. In the Spanish Pyrenees, the main Christmas meal was “Pavo Trufado de Navidad”, which is turkey stuffed with truffles, although it’s harder to find these days. 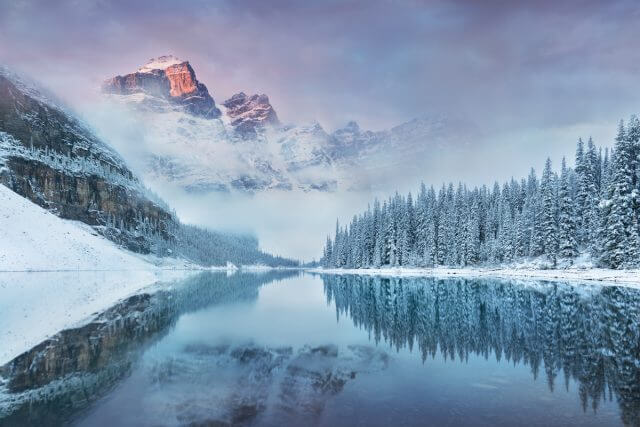 The Ski Resorts of Christmas

Although snow is to be expected at Christmas in ski resorts and the early signs for Christmas 2019 are looking good, touch wood, as detailed in our main story this issue, you never can be too sure.

Those in search of a white Christmas for their skiing as much as for atmosphere are advised to aim high and book a high-altitude (or northerly latitude) resort to up their chances of good cover.

But a lot of those high-altitude ski areas are a bit lacking in festive cheer, so we’ve tried to select 12 areas that have both a snow-sure altitude and bags of character for festive atmosphere – the best of both worlds.

Mürren is a magical location at any time of year, but at Christmas it has a particular appeal. It’s high enough to mean the traditional wooden chalet buildings are pedestrianised streets usually lie deep in snow with lights twinkling all around.

Although it has the feel of a traditional resort, Val d’Isère sits very high up in the French Alps above 1,800m and is snow-sure from early December. The old heart of the resort and the streets around the church have a particularly special atmosphere at Christmas.

This traditional mountain village has one of the best snow records in the Alps. It opened in early November this year and last winter had snow lying 6m deep up top for most of the winter. Along with Christmas spirit, the ski area has just expanded to an impressive 180km.

High in latitude, rather than altitude, Yllas in northern Finland lives in almost 24-hour darkness over Christmas week but should have a great atmosphere with its many log cabin buildings hopefully buried in snow and lit up with festive lights.

It is no surprise that Wham! chose Saas-Fee as the filming location for their Last Christmas video, which was filmed more than three and a half decades ago (but is still shown countless times each festive season). Car-free, picture-postcard perfect and so snow-sure it is open from July to the following spring.

Although not the prettiest of Austrian resorts, Obergurgl is one of the snowiest and is full of festive cheer when Christmas rolls around. One of the first in the Alps to open in early November each year, there’s a Christmas market in the village square open at weekends in the run-up to Christmas.

Although a newly built resort only two decades old, Arc 1950 has been cunningly designed to appear like it has been there forever. The car-free snowy main street/ski slope through the village is lined with enticing shops and cafes, and Santa’s village moves in from the 21st to the 27th this week.

Open since mid-November and with glacier skiing above, this December Crans-Montana will debut its enchanted lantern-lit forest path, as part of the new month-long Etoile Bella Lui festival, which also includes a Christmas craft market and big wheel.

If you’re looking for a Christmassy American resort, Aspen ticks all the boxes. The local Chamber of Commerce organises “12 Days of Aspen” from 20 December through to the start of 2020 with dozens of fun and often free events, and many resort businesses have their own Xmas specials too.

A modern resort above 1800m but one without cars and built to a cool, unique architectural style that still feels special, Avoriaz also pulls out all the stops for Christmas with lots of events including a workshop where Christmas soup is served. Kids under 12 ski free at Xmas too. 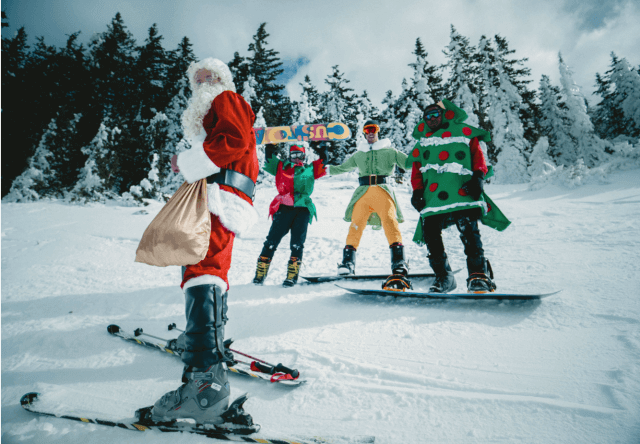