A number of ski areas in New Zealand have announced plans to celebrate “Christmas in July” this Saturday, 25th July.  This basically means ‘Christmassy’ themes and decorations in resorts, and skiers and boarders invited to hit the slopes in Santa suits or other Christmas-themed wear.

The Remarkables and Coronet Peak ski areas in New Zealand (pictured), where resorts are operating relatively normally following the country’s successful suppression of the virus, and there’s been lots of fresh snowfall this week, are among those who are making a big push for ‘Christmas in July’ celebrations this year,

“Think old classic Christmas tunes, themed food and bevvie offerings plus the perfect excuse to brush off the cobwebs on any of your old festive knitted jumpers,” an enthusiastic social media post from the resorts suggest, continuing, “Need further convincing? We’ll have some awesome spot prizes to give out for best dressed. Everyone loves an excuse to celebrate Christmas! Who’s in?”

The concept of ‘Christmas in July’ goes back a least to the late 19th century with the 25th the most popular date (of several possible), for it to be celebrated – 7 months after the previous December 25th and 5 months before the next one.  The more evenly placed June 25th has never caught on.

However some ski areas have opened on actual Christmas day following very snowy winters and perhaps late spring snowfalls. Mt Ruapehu in New Zealand is one of the areas to have managed this in recent years. 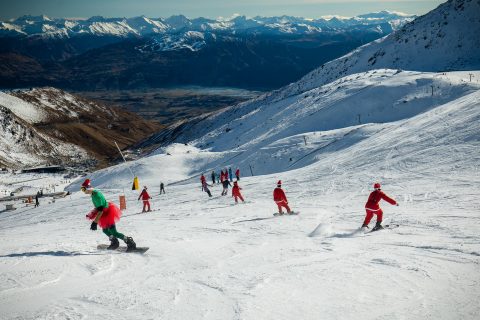