A musician who also does impersonations has filmed a mock protest he staged against the closure of the popular dry ski slope and ice rink at Bracknell.

Ashley Prout decided to do his impression of the Sacha Baron Cohen character Ali G in homage to the 2002 film ‘Ali G Indahouse’ in which, in what now appear a prophetic depiction, Ali G’s character stages a protest outside the John Nike Leisure Centre that’s depicted as under threat of closure in the film.

“I am from Bracknell and the place is very close to my heart, as is the John Nike Leisure Centre,” Ashley told GetReading.co.uk, adding, “So, given how much the place relates to the Ali G movie, I thought why not get myself down there and do what I do best?”

Bracknell dry ski slope closed down when the pandemic lockdown began in March and its owners have now announced it will not re-open, saying that it needs extensive work which they didn’t have the funds to complete.

Ashley performance outside Bracknell mimicked the plot of the ‘Ali G Indahouse’ recreating the protest staged by Ali G’s character in the film, shot at the Bracknell centre although in the movie depicting a fictional gang hangout in Staines. 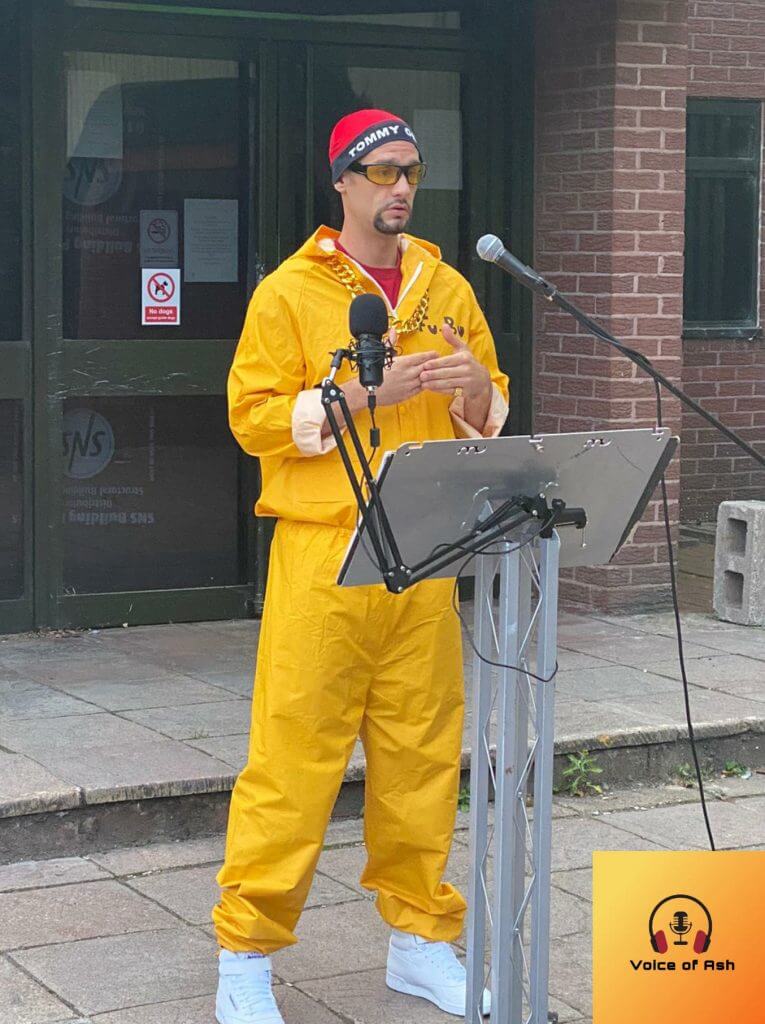 Ashley, who also works as a DJ and sounding and lighting technician, told GetReading.co.uk that he recorded the video over two days, arriving at the centre at 5am to avoid being too distracted by people spotting ‘Ali G’ and interrupting his work.

He said his work doing impersonations, promoted as Voice of Ash, had helped keep him focused during lockdown. They’re also proving very popular with his last video receiving more than 150,000 views.

John Nike, who died on Christmas Day 2016, set up the ski slope in 1985 and created a group that went on to open dry slopes at Plymouth, Llandudno, Chatham and Swadlincote which are all still operating.

The Bracknell centre has played an iconic part in British skiing for the past 35 years and was one of the very few dry slopes to have its own chairlift. Besides ‘Ali G Indahouse’ the slope also featured in the movie ‘Eddie the Eagle’.

“Lots of very good skiers and people who are still in the industry came from that place,” said Rob Stewart who runs Ski Press PR and got his first job at the slope as a young teenager back when it opened.

Ashley has now called on Sacha Baron Cohen to help save the centre.