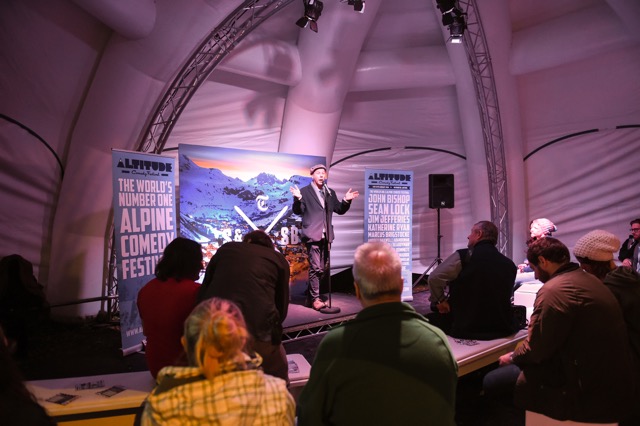 Visitor numbers for The Telegraph Ski & Snowboard Show staged in Battersea Park dropped by nearly a third after having climbing up 11% the previous year.

Numbers released by the Show’s organisers showed attendance of 25,587 at the event a month ago, compared to the 35,269 who attended the show at Earl’s Court in 2014.

This year’s London Show had a new feel and new format which received praise for many aspects including a less noisy, more intimate exhibition hall; better food stands and attractions like a comedy tent (pictured above) and real snow slope.

Admission prices more than doubled although tickets were offered at discounts and did include a free subscription to The Telegraph Ski & Snowboard magazine.

Some critics suggested the show was too far from public transport, was poorly signposted and said that the admission price was high for people who were just seeking holiday advice and weren’t bothered about the new entertainment features.

The organisers say new attendees were around 30% reflecting, perhaps, a growth in those who were attracted by the new format,

“We worked incredibly hard to bring our new concept to life in Battersea Park. We always aimed to create an authentic alpine feel, whilst still remaining true to our market and we attracted a premium, high-net worth audience this year,” said Lindsey Guy, The Telegraph Ski & Snowboard Show, Show Manager.

“We’re already planning next year’s event and will be moving back into the school holidays with a focus on families, as well as expanding on the excellent après atmosphere. In addition we’ll be introducing more signage, along with more covered and seated areas, as well as aiming to grow our visitor numbers without losing our core snow sports market, ”