The Return of Direct Rail Services to the French Alps

Iain Martin from Ski Flight Free and The Ski Podcast tries out the new Travelski Express via Bourg St Maurice to Les Arcs.

History was made yesterday as the first Travelski Express ski train to the French Alps departed, exactly on time at 20:04, from London St Pancras.

It’s the first non-stop service from the UK to the Alps since April 2019, and as the train pulled away from the platform a small cheer rippled through the train. 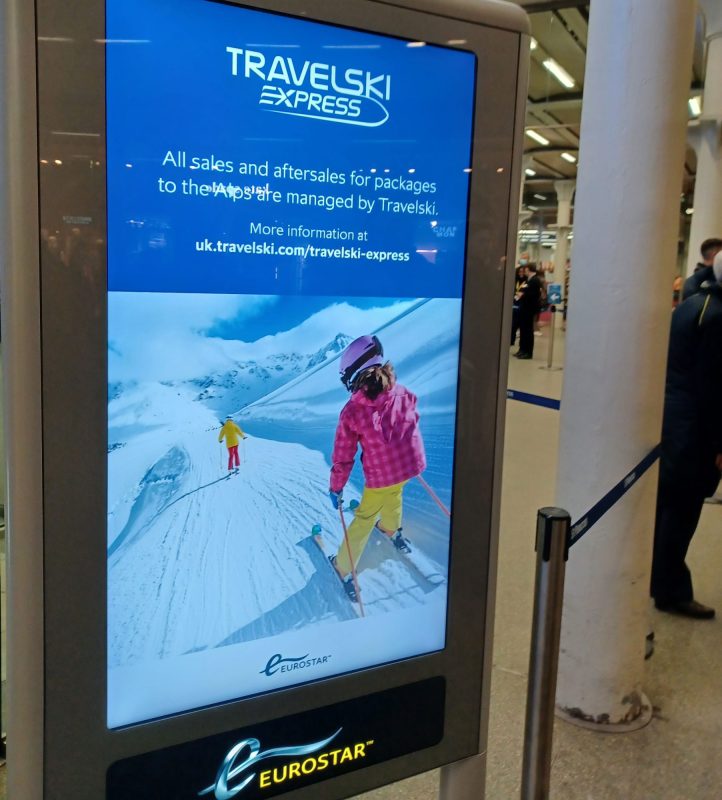 This inaugural service should have taken place on Boxing Day, but Monsieur Macron’s travel ban on UK visitors, introduced on 18 December, put that date back by six weeks.

Some passengers were relieved to be travelling at all, having booked in the autumn, desperately hoping travel would be allowed again in time for their trip.

Others had bought their Travelski package – which includes train travel, transfer, accommodation and 7-day lift pass – only once the ban had ended. They are not alone – the company has reported over 1000 sales in the last 10 days since the ban was lifted. 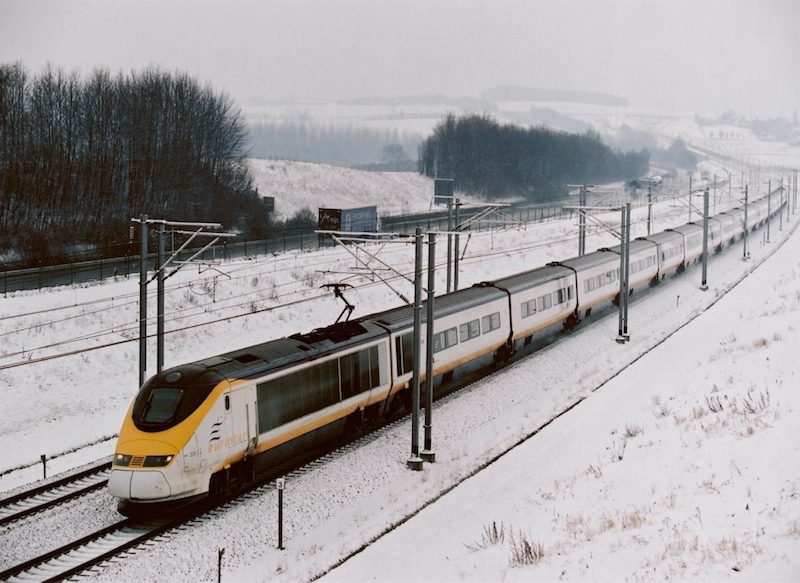 Why travel by train at all? For some the Travelski package simply represents excellent value, although almost all passengers I spoke to mentioned their desire to travel in a more environmentally friendly way.

After a season of no skiing, perhaps it’s no surprise to learn that the next most common reason I heard for taking the train was the chance to claim an extra day on the slopes.

The train arrives early – you reach Moutiers (for Meribel, Les Menuires and La Plagne) at 5.30am and Bourg St Maurice (for Tignes, Val d’Isere and Les Arcs) at 6.15am – which means that even allowing for the final bus journey to resort, transferring into your ski kit (Travelski arranges somewhere to change and to leave your luggage during the day), collecting your ski pass and arranging hire, you can still be on the first lift by 9am. 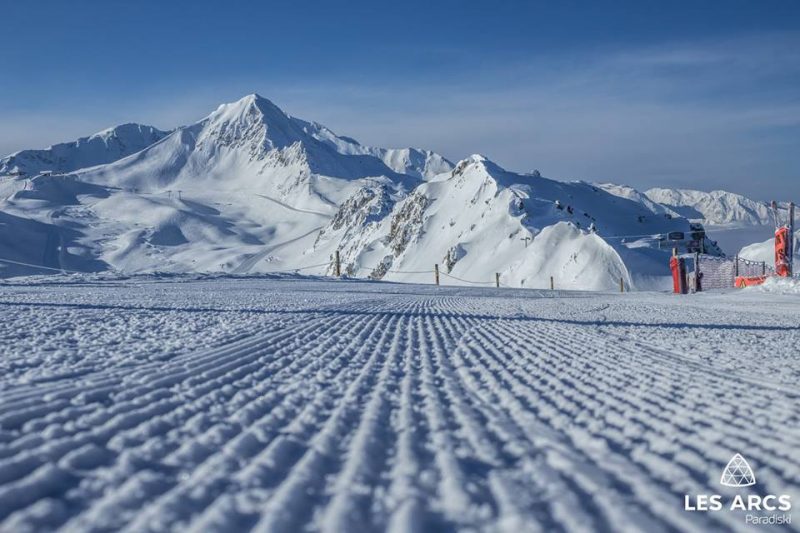 The cost of your early arrival is lack of sleep the night before. Most people I spoke to managed 3-4 hours: some simply dozing in the reclining seats, while others took more radical measures and chose to lie on the floor, spread under several seats.

Much of my night was spent trying out different positions to find a vaguely comfortable solution. I was lucky to have two Standard Premier seats to myself and I would highly recommend the upgrade, which can be available from as little as £5 per journey. Not only are you given wider, more luxurious seats, you’re also provided with a choice of hot meals for dinner, as you would on a long-haul flight. 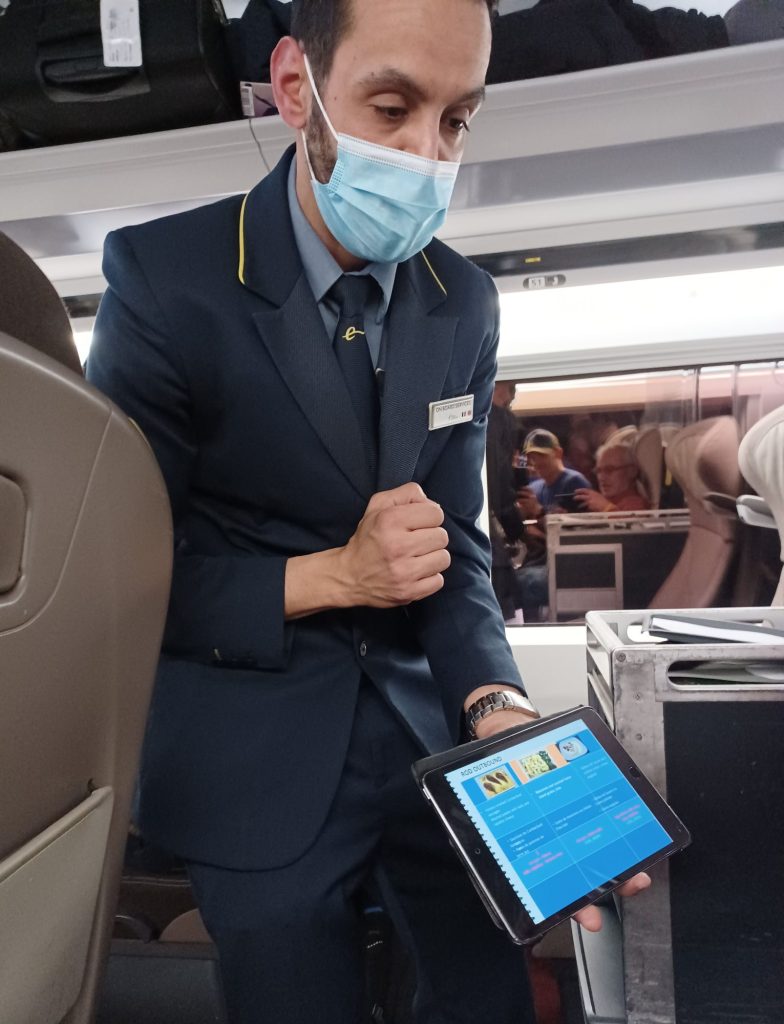 I’d also recommend taking a ‘proper’ pillow – not just one of those neck-supports – and pack the puffiest puffa jacket you have for extra cushioning.

Don’t imagine though that you’ll be able to dose yourself with a bottle of wine or a few beers. The overnight train is strictly alcohol-free: a deliberate decision by Eurostar, who realised several years ago that ‘snooze’ and ‘booze’ don’t mix well. The days of the ‘disco carriage’ on the ski train are truly gone: with no drinks on sale, the buffet carriage was noticeably empty.

Despite the lack of sleep, I have no doubt it was worth it. Twelve hours after leaving London, I was on the slopes in Les Arcs: the sun was out; the air was clear; the views were incredible. And most people in the UK hadn’t even woken up yet.

Iain travelled on the Travelski Express, staying at the Hotel Arcadien in Les Arcs 1600. Ski hire was provided by Intersport Ski Hire.