The great Norwegian ski racer Aksel Lund Svindal has melted down the very first World Championship Gold Medal he won in Are, Sweden in 2007.

The gold from the medal will now be divided in to no less than three million tiny parts which will be integrated in to SIM cards issued to Norwegian subscribers to the Telenor network, Norway’s largest phone network and a long time sponsor of Lund Svindal.

The 91 grams heavy gold medal has been pulverized to 120 million tiny particles of which about 40 of these particles are found in each new SIM card that Telenor issue to mobiles, tablets and PCs.

“Last spring we had a brainstorming session around how to connect downhill speed with fast wireless connection. This turned into a crazy idea with the potential to make a downhill gold medal into much more than a trophy hanging on the wall,” said Svindal, who returned from injury last season only to be forced out by a new injury at the infamous Hahnenkamm downhill in Kitzbuhel in January whilst he was leading the World Cup circuit,

“This has been an exciting project. The future will be more exciting, looking at the possibilities to contribute and letting a gold medal do more than being a nice decoration on the wall,” he added.

Revenue from sales of the chips, which Telenor marketing points out will bring three million Norwegians ‘closer to skiing’ will be used for a new initiative set up by the company and Lund Svindal and named the Aksel Fund. 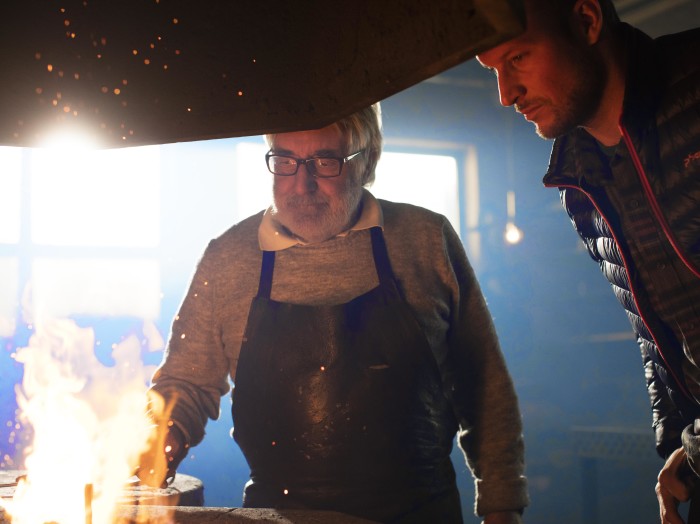 This aims to support initiatives that promote enjoyment of sport that Aksel is passionate about including helping clubs and associations that need equipment, giving more children the opportunity to ski and helping children and adults to recover from an injury.

An initial donation of NOK 250,000 (over £20,000) has been made to the Sunnaas Foundation which helps people with serious sporting injuyries,

“The Sunnaas Foundation is definitely a worthy recipient. The road from being a top athlete to be patient may be brief. I know a lot about this myself. I also collaborated with Sunnaasstifelsen on numerous occasions as a motivator and know they’re going to spend the money well,” said Lund Svindal.

Lund Svindal says that the gold in the downhill World Cup from Åre has a special meaning for him, but that it is not the physical medal that matters most.

“The efforts behind the medal means much more. It would have been cool to look at it in prize cupboard when I finally put one up,” said Lund Svindal, “Now instead there’s a fund to symbolize the missing medal which suits me fine. What we do with the fund and the people we will help, is going to be much cooler than the actual medal.”

An Interview With Aksel Lund Svindal – The White Out Shorts