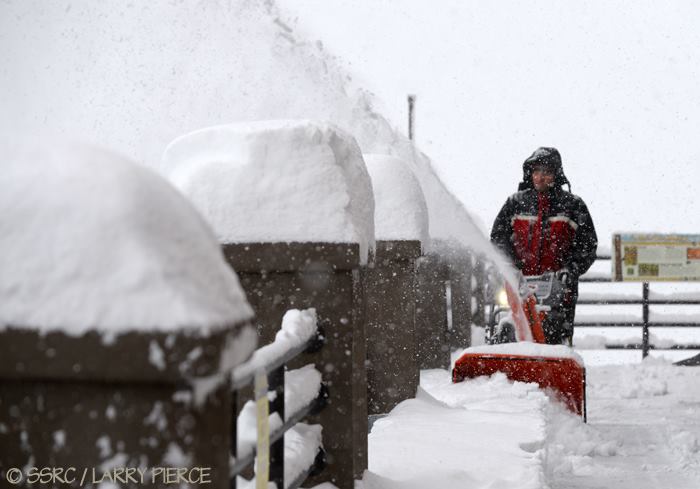 The ski world is going crazy with resorts opening daily on both sides of the Atlantic. At the moment the north Americans are leading the race, thanks to a combinations of some great early snow conditions (some resorts in Colorado have seen 2m fall in the past month, much of it in the last 10 days) and keenness to be open for this busy Thanksgiving Holiday weekend. But Europe is about to catch up and over take (there are five times as many ski areas on this side of the Atlantic so it’s a bit one sided) as thousands of areas open over the next three weekends.
The snow news is a mixed picture. There have been great snowfalls in the North American Rockies, slightly less snowfall on the West Coast and last week a spectacular storm in NE North America that brought over 2m in 72 hours to Buffalo – with ski areas in the region benefitting.
In the alps there’s been some, but less fresh snow this week than previously and resorts are beginning to get twitchy that the best snow is above 2000m with little below. Resorts in the Pyrenees have delayed opening due to lack of snow and in the Dolomites areas are opening but not with as much terrain as they’d hoped.

Austria’s glacier ski areas have had a good week, conditions have been mostly clear and sunny and with the heavy snowfalls of past weeks, conditions have been fairly fantastic on the whole.  The only moans have really been lift queues at weekends with so many people wanting a piece of it.  Depths are typically 1.5 – 2.5m, our picture is from the Stubai.

More resorts are opening in France this weekend following La Clusaz and Val Thorens which joined Tignes a week ago.  Les 2 Alpes and Val d’Isere are joining the party tomorrow, the latter offering free skiing to early arrivals.  There’s been little or no snow in the past week but some is expected next.  Les 2 Alpes (pictured above) will have one of the deepest bases at 80cm.

More Italian areas opening this weekend but it’s not as much as they’d hoped so far in Dolomiti Superski where Cortina will just be opening a couple of runs.  Passo Tonale still has the deepest snow for an open area in the world at present at 3m.  Conditions are also good at Cervinia and Val Senales (pictured above).

Swiss resorts have seen some of the best snowfalls anywhere during November, none more so than Saas Fee which has some of the best snow in the Alps at the moment and top to bottom cover.  But again other open Swiss areas with high slopes including Verbier, Zermatt (pictured above on Wednesday), St Moritz (Diavolezza) and Engelberg are all looking good too.

After good snowfall at the start of November, there’s been very little since and warm weather too, so areas in Andorra and Spain that had hoped to open this weekend have postponed doing so.  There has been some fresh snow on the summits though, this is Vallnord a week ago.

There were big snowfalls on the slopes of the half dozen open Norwegian areas earlier this week with up to 40cm reported at Kvitfjell (picturted durting the snow storm, above, and after, below.  Other areas including Salen in Sweden open this weekend and are looking good thanks to the snow too.  They join resorts like Ruka and Levi in Finland which have already been open a month.

It was very cold in Scotland the first half of this week.  No fresh snow but the dusting already there was maintained.  There’s no real sign of imminent opening at any of the five centres though.  Glencoe is pictured earlier this week.

After a warm early November a front brought snow to much of Eastern Europe’s mountainous areas earlier this week, raising spirits.  Going even further east that most British package tour operators, this is Gudauri in Georgia on Wednesday.

Canadian slopes are in great shape thanks to a week of snow storms and low temperatures.  Inland resorts in BC and Alberta are looking the snowiest, with resorts like Silver star and Sun Peaks (above) opening this week with top to bottom skiing and deep powder.  Whistler reported heavy snow on Monday too but most is high on the mountain.  In the East the snowstorm of a week ago meant conditions were great at areas in Ontario and Quebec that have opened already, including Mont Tremblant (below).

Great conditions in the Rockies, as mentioned, with a dream start to the season.  Solitude in Utah is pictured above. Much of New England is also looking good after the recent storms.  Much of the rest of the country is looking good too and there’s been welcome snow in the Tahoe region in the last 24 hours too, where it was needed.  The snowfall there is currently abundant and on going.