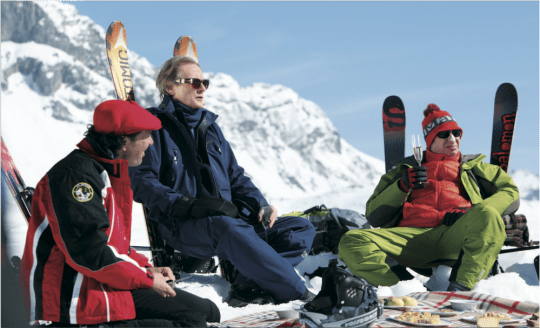 The Best Snow Comedy This Side Of The Alps

Anticipated within the skiing world, and soon to make a big impact on the UK film scene is Chalet Girl, the story of a teenager strapped for cash looking to earn a few quid as a chalet maid, but a season in St Anton leaves her a snowboarding sensation and deeply besotted.

Packed with breathtaking snowboarding action and stunning locations, Chalet Girl is a hilarious and touching story about finding a talent, staying true to yourself and achieving your dreams.

The Alps have been the scene of many extreme ski films over the years, but that is set to change with the launch of Chalet Girl the romantic comedy that follows 19-year-old Kim Matthews, played by Felicity Jones, as she takes on the challenge of her life when she lands a job as a chalet girl in St Anton.

With a job living and working in the luxury chalet of successful businessman Richard Masden, played by Bill Nighy, she spends her days cooking, cleaning andcatering for his family. Propelled into a world of wealth, fun, and endless parties, Kim is utterly baffled by this new way of life. Finding it hard to grasp all the rules and be accepted by her stereotypically posh co-worker Georgie, played by Tamsin Egerton, she quickly finds herself way out of her depth.

With few friends to turn to Kim takes to the slopes, where she discovers the thrills of snowboarding and a natural talent. Filled with a new-found confidence, she enters the resort’s biggest pro-boarding event of the year.

As the competition draws nearer and Jonny and Kim grow closer, it looks like her luck is finally changing. But Jonny’s family has other plans for his future, and they could turn Kim’s world upside down.

It’s a tale just too close to reality for many who have spent time in chalets, either working or on holiday. Staff who are out for the season, indulging in plenty of partying, serving up a lavish pre-rehearsed schedule of cakes and five-course suppers, whilst trying endlessly to ”hit it off”with the rich clientele.

Chalet companies across the Alps are braced for a boost in chalet girl applications for next season. It has been rumoured that the number of gap year staff will fall in the coming year due to higher university fees, but for those still in the market for a year out, or those ditching university altogether, the attraction of the Alps might just be what they need.

The Managing Director of Ski St Martin (www.skistmartin.com) told InTheSnow “Every season there is a great demand for jobs as chalet girls, but it is often apparent that the kind of people who look for the work are not that dedicated to the job, and are more interested in the après-ski, not our clients. That just isn’t what we look for and often have to search harder for the very best.”

The film is set in the upmarket resort of St Anton, however large parts of it were shot in Garmisch- Partenkirchen, Germany. As any winter sports fan knows, mountain weather is notoriously unpredictable and caused a great deal of problems. Director Phil Traill said “One thing out here is no-one can predict the weather, which is very frustrating” he sighs. ”Whenever we tried to plan the following day’s filming, the Germans and Austrians would always say, ’we are in the mountains,’ which is shorthand for saying, ’we haven’t a clue what the weather will be doing.’”

Many of the cast had never skied or snowboarded before production started, including lead actress Felicity Jones, who had never even put a snowboard on. She underwent a 3-week, 8 hours a day crash course in an attempt to master the sport. Co-star, and supposed seasoned ”ski bum”, Tamsin Egerton had also never skied.

Mountain Heaven Are Getting Bigger By Being Better