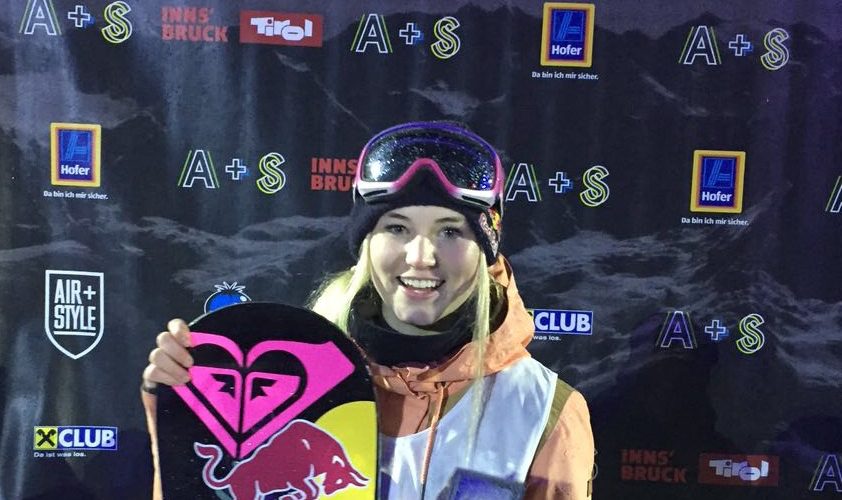 Katie Ormerod claimed yet another podium for GB Park and Pipe this weekend, as she took second place at the prestigious Air + Style event in Innsbruck.

Ormerod’s two team mates, Billy Morgan and Rowan Coultas both put in stellar performances as well, with Coultas claiming a phenomenal 5th place in his first every Air + Style, and Morgan taking 6th place. Great Britain and Canada were the only nations to have three riders in the finals across the men’s and women’s competition.

Ormerod said after the victory: “I’m super happy to take second in such a historic event. It was amazing to compete here, and it feels great to get on the first ever girls podium.”

The rest of the GB Park and Pipe team have been in Mammoth, USA for the Slopestyle and Halfpipe World Cup. Plagued by snow and windy conditions, the Men’s Ski Slopestyle contest unfortunately got cancelled after the qualifiers, when Tyler Harding was lying in second place.

In the Ladies’ Snowboard Slopestyle contest, Aimee Fuller finished in an impressive 5th position in the finals, another strong performance in Olympic qualification year.

GB Park and Pipe team now head to Quebec City for the last stage of the World Cup Big Air Super Series where riders will battle to be crowned the world’s best after the three stop tour, previously in Milan and Moenchengladbach.

There will be a Slopestyle World Cup alongside the Big Air, with skiers James Woodsy Woods, Tyler Harding and Cal Sandieson competing across the two disciplines in the men’s contest, and Izzy Atkin, Madi Rowlands and Katie Summerhayes competing in the ladies’.

In Snowboard, Katie Ormerod, fresh from her Air + Style podium will be competing alongside Aimee Fuller in the Ladies Slopestyle and Big Air. Billy Morgan, Rowan Coultas, Jamie Nicholls and Matt McCormick will be representing in the men’s, again across both disciplines. Action starts on Thursday.

The Delancey British Alpine Ski Team are gearing up for the start of the FIS Alpine World Ski Championships in St Moritz, which start today. The full team will be announced later today, with British athletes only competing in the technical events.

Alex Tilley is in action this week in two Europa Cup Slaloms in Bad Wiessee, Germany on 9th and 10th February and Charlie Raposo and Nick Moynihan tackle two GS Europa Cups in Jasna, Slovakia on 8th and 9th February.

At the Nordic World U23 and Junior Championships in Park City, which concluded yesterday, Fern Cates claimed 43rd in the U23 10km Freestyle and James Clugnet was 48th in the U23 15km Freestyle.

Zoe Gillings put in a strong performance at the Snowboard Cross World Cup in Bansko, Bulgaria, qualifying for the semi-finals and finishing in 18th place overall.

Emily Sarsfield had her best World Cup result of the season in Feldberg, Germany, finishing in 13th position on Saturday, after poor weather conditions resulted in the preliminary round results to be used as final. GBR teammate Pam Thorburn finished 20th overall. Sunday’s weather meant unfortunately, the Ladies’ contest didn’t get started and there were no results used.

Snow flurries and wind made life a little difficult for Lloyd Wallace at the Deer Valley Aerials World Cup. Wallace jumped a triple triple (lay double-full full) but didn’t land well and finished in 25th position. He will now travel to South Korea for the World Cup and Olympic test event in Bokwang on Friday.

Last week saw the start of the World University Games, in Almaty, Kazakhstan, seeing a team of 10 British University athletes challenging. Elodie Wallace competed across both Moguls and Aerials, finishing 16th in the Moguls, 12th in the Dual Moguls, and 9th in the Aerials competition. The Men’s Moguls competition saw Sam Jones and Liam Keyes competing from Great Britain, who finished 14th and 15th in the Moguls respectively, and Sam finishing 12th in Dual Moguls whilst Liam unfortunately DNF’d.

It was the turn of Snowboard Cross on Thursday where Douglas Green finished 21st and Rob Wagner 32nd, whilst Gillian Finnerty finished 10th overall. Laurence Willows is up tomorrow for the Ski Cross.

In Alpine, Alice MacAulay finished 30th in the Giant Slalom on Friday, with Alex Barounos finishing 34th in the Men’s GS on Saturday. Alice unfortunately DNF’d in the Slalom today, and we will see Alex compete in the Men’s event tomorrow.

Snowboard Slopestyle athlete Calum Paton impressed with his 8th place in the Men’s competition yesterday, a strong result from the Sheffield Hallam athlete.