Following on from the highest zip-line in Europe, Val Thorens is back with a new innovative flight through the heart of the resort. Safely strapped into a harness, with your skis attached to your back, you launch on a 1,600-metre-long flight, 65 metres above the ski slopes. Take flight from the top of the La Moutière chairlift and land in the heart of Val Thorens, Place Caron, in three sections. The zip-line experience has now doubled for simultaneous departures.

Open daily, the zip-line is accessible to skiers and pedestrians, with average speeds of 75 kilometres per hour. It costs €35.

La Toussuire in the Maurienne Valley also has a new zip-wire. It goes over Titou Lake at a height of 150 metres! Children from 10 years old can do it. It costs €5.60.

Les Carroz has a brand new Four Seasons toboggan. Thrillseekers take to the rails for an adrenaline rush over 350m, after which they embark on a 850m descent with banked turns and glides through the forest. It starts from the Kédeuze gondola. The toboggan can be enjoyed alone or as a pair and is open to children from 3 years old, accompanied by an adult.
It costs €7 for one run, €30 for 5 runs. 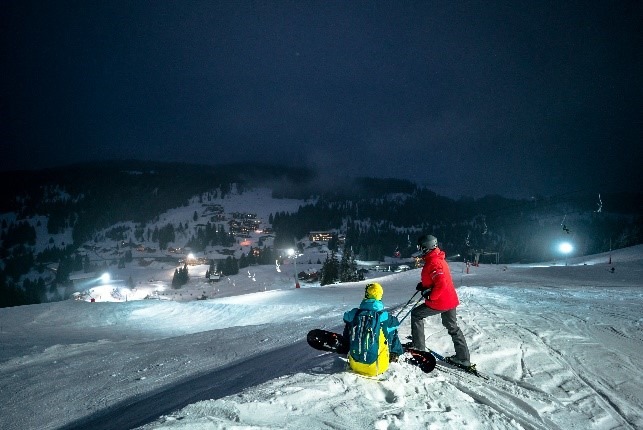 Valmorel has a new 2.4-kilometre toboggan run. The Gulli run has a maximum slope of 15%, which makes it ideal for families as the run is very gentle. It is also connected to an app where you can do a treasure hunt. Children from 3 years old can do it. It costs €7.

Savoie Grand Revard, a small resort just above Aix-les-Bains, has a 180-metre long Tubing Jump run. Slide on an XXL inner tube (also called a doughnut) and take banked turns at full speed before taking off on a big jump and landing on huge airbags! Children from 4 years old can do it accompanied by an adult. It costs €3 for one run, €10 for 5 runs.
www.savoiegrandrevard.com

With eight lighted runs, three chairlifts and one draglift, Manigod has the largest ski area by night in Savoie Mont Blanc. It opens every night during the school holidays, and, at other times, every weekend.

Courchevel is known for ski jumping as it hosted the ski jump during the 1992 Winter Olympic Games. From this season, children can also try ski jumping, which will be done with a ski instructor from ESF on a 25-metre-long ski jump. Children need to have their ‘Bronze’ level of skiing to do it. It costs €120 for a private lesson of an hour and a half.

Events in March and April in Val Thorens